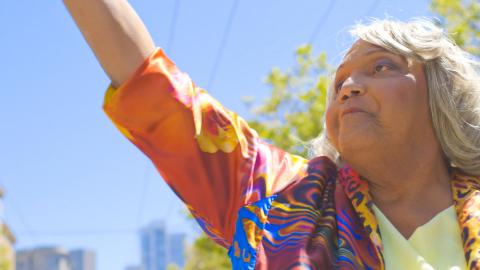 This winter I was put in charge of organizing the TMP’s second public screening event! It was held at the Knot Project Space, at the SAW Gallery in Ottawa, on 26 February 2019.

It was difficult to choose which and how many films to screen but in the end I decided to show one feature film and to hold a panel discussion afterwards. Our feature film was the documentary Major! (Annalise Orphelian, 2015) and my two runners-ups were Framing Agnes (Chase Joynt, 2018) and Happy Birthday Marsha (Tourmaline and Sasha Worzel, 2017)-- if you have a chance make sure to check them out as well!

Now, a little confession, I hadn’t seen Major! before the screening, but our project director, Laura, had seen it and  I had heard a lot of rave reviews of the film through social media so I knew it would be a good choice. Watching it for the first time with a large group of people at the Knot Project Space definitely made my first watch more memorable than if I had just watched it alone on my laptop. Watching inspirational movies with friends only makes the messages more powerful and having the opportunity to watch this doc with my community only heightened the emotions that came with watching this film.

Major! tells the story of Miss Major Griffin-Gracy, a Black transgender activist who has fought for the rights of trans women of colour for more than 40 years.

Griffin-Gracy is a fierce advocate for prison abolition and is one of the important figures from Stonewall. She was executive director of Transgender Gender-Variant Intersex Justice Program (TGIJP) which works to assist incarcerated trans people and has since retired from her position but that doesn't mean she isn't still fighting everyday for trans women of colour. She is currently working on creating the House of GG, the Griffin-Gracy Educational Retreat and Historical Center which will be a permanent house for trans people to feel safe and connect with other people working for social justice movements. Her history is integral to the history of all trans people. Our screening happened to coincide with the announcement that Miss Major would be gracing the cover of Out Magazine! It was perfect timing! It is really exciting to see her get some of the recognition and attention that she deserves.

At the end of the film we had a discussion with our two guest panelists, Thane Robyn and Leon Laidlaw. Leon is a PhD student in Sociology at Carleton University, where he works at the intersection of transgender studies and critical criminology. His current research explores how carceral powers condition the lives of two-spirit and trans people in Canada. Thane is an artist, organizer, community builder, and facilitator who is currently sitting on the board at Kind Space. He is passionate about dismantling white cisheteropatriarchy and is a trans powerhouse and community worker who is ready to help you be a better trans ally as long as you’re ready to do the work! You can listen to that conversation on the Knot Project’s SoundCloud page! This was a really interesting and very useful conversation, though it is also  important to note that we did not have any trans women of colour on our panel and so the conversation was lacking in those key perspectives. It was a really great event and I’m excited for the project to have more events like this one.

I also want to say a quick thanks to all those on the TMP team who helped me with my planning, especially Noah who set the precedent with the previous screening and Laura who helped guide both of us in the right directions. Thanks to Neven from SAW Video for allowing us to use the Knot Project Space again and for providing us with equipment and snacks. Big thank you’s to our awesome guest speakers for coming out and of course to Miss Major because without her not only would we be unable to watch this film but we would not have the rights that we experience today!