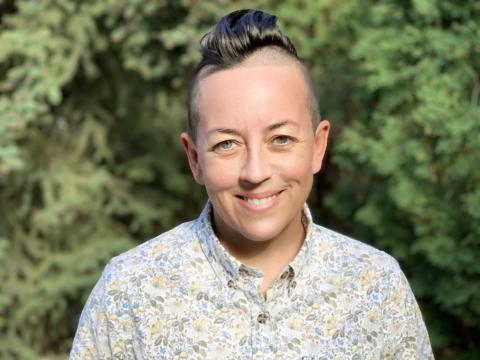 Introduce yourself! What has your academic and professional life looked like so far, and what drew you to this particular opportunity with the Transgender Media Lab?

Hello! I am a non-binary, socially engaged, interdisciplinary artist living in Regina, Saskatchewan on Treaty 4 lands. I have a BA in Journalism from the University of Montana and an MA in Political Science from the University of Regina, where I’ve taught courses in Political Science, Sociology, and Women’s and Gender Studies. I’ve worked as an editor, a CBC producer, a freelance journalist, and in communications for a labour union and a university.

I began engaging with communities through art about six years ago when I facilitated digital storytelling workshops across southern Saskatchewan as a Culture Days Animateur with SaskCulture. My intention with these workshops was to provide people with the skills to be able to share digital stories about their lives in their own voices. I’ve since produced several audio walking tours of neighbourhoods in Regina, including Queering the Queen City (co-produced with Dr. Claire Carter), which features place-based stories told by queer, trans, non-binary, and Two-Spirit folx. Recently, I completed a collaborative portrait and digital storytelling project, Stories That Move You, with transgender and non-binary people in Saskatchewan. One of the goals of this project was to disrupt the “cisgender gaze” by supporting the participants’ agency throughout the process of creating their portraits. I’ve also collaborated with the National Film Board on an interactive web project, Un/tied Shoes, which explores my genderqueer identity through footwear.

Although it’s been 12 years since I completed my MA, the fellowship opportunity with the Transgender Media Lab makes me feel excited about returning to academia. I am particularly inspired by the idea of joining a team of researchers who are committed to ethically representing trans filmmakers and artists in a crowd-sourced database that will help to make trans-made films more accessible. As a PhD student in the Cultural Mediations program at Carleton’s Institute for Comparative Studies in Literature, Art and Culture, I will be researching the ethics of engaging trans participants in media art projects. I’m specifically interested in the role of improvisatory practices in fostering productive spaces for trans participants to exercise agency over how they wish to be seen.

How do you spend your time off (do you have any cool hobbies)?

I try to rest, and be in nature as much as possible, but I rarely feel like I have time off since I’m typically working on creative projects when I’m not at my day job, or thinking about future projects, and strategizing against injustices. Over the years, in my “spare time,” I’ve started a pop-up radical book collective, volunteered for a 24-hour sexual assault line, helped start a Regina chapter of Books Through Bars, successfully organized in response to a Regina barbershop’s discriminatory male-only policy, and, most recently, co-produced a children’s bi-weekly radio show with my partner for Regina’s community radio station, 91.3FM CJTR. I also enjoy gardening, caring for my two pups, and spending time with my partner and her two kiddos.

What have you done that you are most proud of?

A couple of years ago, I joined the Board of Directors of Common Weal Community Arts – a socially engaged arts organization in Saskatchewan. Within a few months, I unexpectedly stepped into the role of chair. I’m grateful for the support I’ve received in this role, and I’m proud to be part of an arts organization that engages in thoughtful, collaborative artistic processes with marginalized communities. I truly believe that Common Weal’s programming is making a real difference in people’s lives, and helping to create social change. One of Common Weal’s programs, Respond to Racism, was a response to the hateful rhetoric surrounding the tragic death of Colton Boushie, who was shot and killed by a white farmer in August 2016. Respond to Racism pairs artists with rural communities in Saskatchewan as they participate in discussions on racism and engage in critical self-reflection. Other Common Weal programming that I passionately support includes: Art Lodge, which connects artists with inmates to assist with collaboratively writing, performing, and recording songs; Queering Dance, which provides trans and non-binary people with exclusive workshops on dance; and Hello In There, which pairs artists with seniors in long-term care homes to engage them in storytelling activities, and assist them with creating memory boxes about their lives.

How has COVID-19 changed your plans for the next year?

I was planning to move to Ottawa in September, but since Carleton’s courses will be offered remotely, I’ll be staying in Regina for the fall semester. This is disappointing, as I was looking forward to getting to know everyone involved with the TML, and becoming part of the trans community at Carleton. But it also means that I will get to stay with my family and have their nearby support during my first semester.

What are you most excited about for this upcoming chapter in your life?

After years of being in the workforce, I’m excited to have time to critically engage with theory and make art. I’m also looking forward to working in collaboration with the TML’s research team, and helping to create the Trans Media Portal. It is going to be wonderful to be able to devote time to the things I’m most passionate about, including research, socially engaged art, and trans-made media.