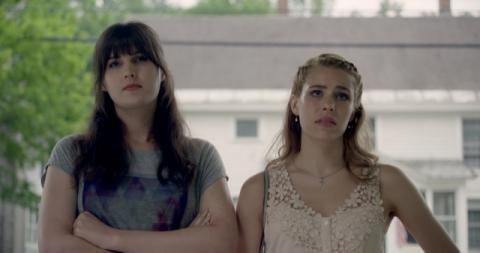 When Professor Horak told me that I would be planning an event to showcase trans cinema, including selecting a program, at the SAW Gallery’s Knot Space in Ottawa, I was terribly excited. There are so many fantastic trans films in the world; selecting some would surely be easy! I found myself mistaken, however, when the responsibility of this task began to set in: for many, this would be their first experience with transgender cinema besides the wild misrepresentations peddled by Hollywood. Furthermore, this was the first-ever event being held by the Transgender Media Portal project, and it needed to reflect our team’s values.

As a result, it actually took several weeks to solidify the program for this event. My TMP research on trans film festival programs had begun more than a month before, and for each festival, there were several years’ worth of films listed, so to sift through those and locate two shorts and a feature that I felt would properly encapsulate the goals of the project was difficult. I placed criteria on myself that I thought would help to narrow the choices:

Beyond my own criteria, the films needed to be accessible to screen, short enough to fit into the event’s 3-hour time frame, and affordable for the project’s budget. With all these parameters, I expected selection to become easier, when it, in fact, made the task much more difficult. I found that, even in trans cinema, so many projects include cisgender actors playing transgender characters. Furthermore, as in most Western cinema, white voices dominated the body of work, heterosexual stories were featured in the vast majority of romances, and it was rare to find a film that included a character that was explicitly non-binary.

Many of the social power structures found in mainstream films are still being upheld in this supposedly-subversive pocket of cinema. It was a deeply startling thing to notice.

Fortunately, I was able to find pieces that didn’t force me to compromise on most of my initial search criteria, and I am still so thrilled that I was able to share them with others because I do truly hold these works close to my heart.

Limina (2016) is a Canadian short film by Joshua M. Ferguson and Florian Halbedl that features a non-binary child playing a non-binary character. Beyond that, the film is visually striking, and heartwarmingly hopeful. The plight of young Alessandra (Ameko Eks Mass Carroll) to facilitate the healing of a grieving mother, placed against a beautiful British Columbian backdrop, creates a picturesque scene of childlike optimism—something that is often sorely missing from the often-pessimistic canon of transgender cinema.

Spot (2017), an American short by Jamie DiNicola, diverges from the traditional narrative format by jumping backward and forward in time to create a mosaic of moments that have passed through that particular city street corner. The film features an all-transgender cast, but does not necessarily cast all its characters as transgender, which is a very rare choice for a filmmaker. Stories of love, sex, violence, and familial strife are all shown to be universal potential experiences, regardless of race, gender, or sexual orientation. Furthermore, DiNicola takes an alternative approach to crediting his cast by having them all introduce themselves verbally and self-identify as transgender, rather than using traditional rolling credits, which elevates the visibility of his cast as entirely transgender rather than allowing this to potentially go unnoticed.

Finally, Boy Meets Girl (Eric Schaeffer, 2014) was the commercial feature I selected for the program. The film follows the romantic journeys of a young, bisexual, transgender woman in her rural town. It was a film I watched early in my own transition and it brought me some sense of hope for my own future at the time, so I figured it would be a good piece to share with others.

While not every seat in the venue was filled on the evening we screened these films, those that did attend were active audience members who were clearly genuinely interested in not only the films but in the project itself, which was all we could have hoped for. I decided against staging a formal discussion after the feature film, so that there was little pressure on the audience, with an understanding that if folks were interested in building community and engaging socially after the screening, that would happen organically. True to form, a large gathering of young people stayed in the SAW Video foyer after the event to share their thoughts, feelings, and experiences. New connections were made, and the lasting impression made by the Transgender Media Portal’s first event was (I sincerely hope) one of optimism, collaboration, community, and joy.